Vegan in Paris… sounds like an oxymoron, doesn’t it? But nope…. the land of cheese and croissants also does vegan pretty well.

Last month I was in Europe to teach some vegan cooking classes in Germany and Denmark and found myself with 10 days in between. What else could I do but do some traveling? Such a hardship, I know 🙂 . I’ve been wanting to go back to Paris and London, so this was a perfect opportunity.

When I started looking for vegan restaurants in Paris, I was surprised at how many there are. I only managed to get to 3 of them in my five days there, so I guess I’ll just have to go back for the rest! I did try to go to another one, but it was FULL when I went for lunch one day. In my starving-crabby state, I somehow decided it would be easier to get on the metro and go across the city to a different restaurant than to wait for a table to open up. (We’ve all been there, right?)

The first restaurant I visited was the Gentle Gourmet Cafe, and it had some really amazing items. I got a little carried away, wanting to try everything, so rest assured that I didn’t eat all of this in one sitting… some of it came back to the hotel with me.

I tried this incredible quiche Provencal, which had tomatoes, zucchini and basil in a light crunchy puff pastry crust. What made it really amazing was the fillling. I’ve made & eaten tofu-based quiche before, but it always tends to be like a block of seasoned tofu that’s dry unless it has a nice sauce on the top. This quiche was saucy on the INSIDE – with every bite, there was a burst of what tasted like a cashew creaminess on the inside. And it came with an arugula salad with a nice balsamic viniagrette. I MUST figure out how to make that quiche!

I also tried their pizza, which was very good but I’ve had better at other dedicated vegan pizza restaurants. It did have a nice light crunchy crust though. 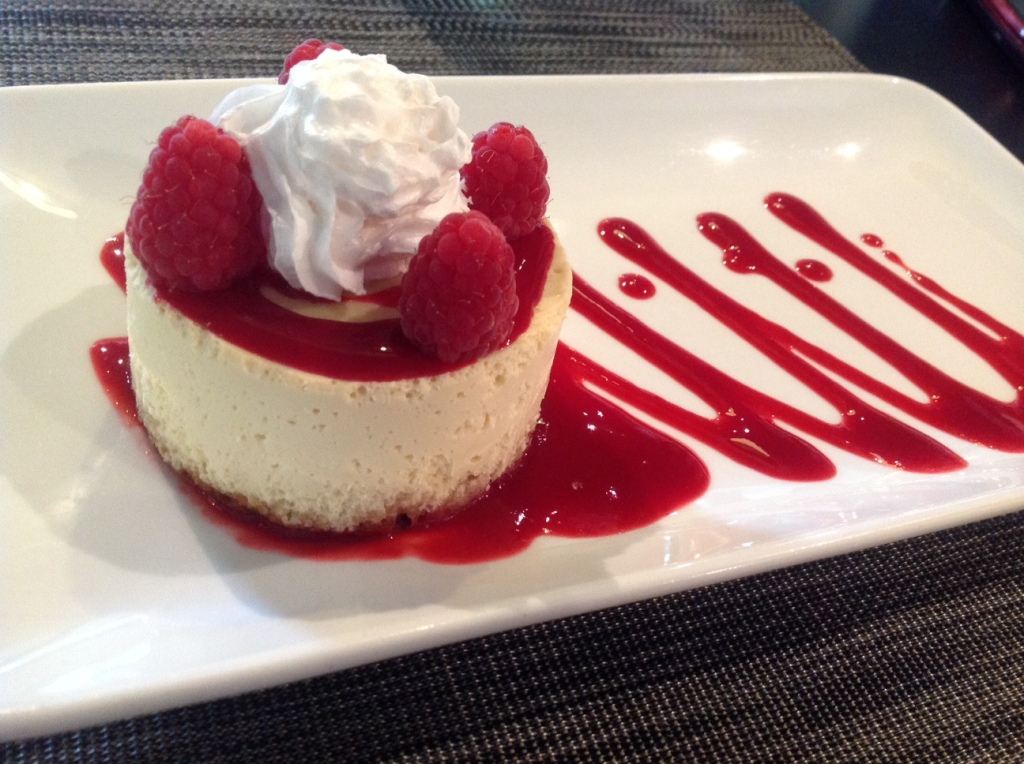 And dessert was the best thing ever  ~ it was a white chocolate cheesecake with raspberry sauce. There were no words to describe it. Another thing I’ll be making 🙂

I also went to Hank Restaurant Bio, an organic vegan burger place, one afternoon. They had 4 or 5 vegan burgers on the menu, all the same basic one with different toppings and sauces.  I wasn’t quite sure which to choose, so I got a spicy one (not sure if it’s an accurate translation of the name, but Google translates it to “little nervous”. Ha!) that had cilantro sauce, chilis, red onions, lettuce and a few tortilla chips for crunch. It was very good, as was the coleslaw that came with it. It came all wrapped up in the cutest paper – look at how it comes together at the top ~ I love it! 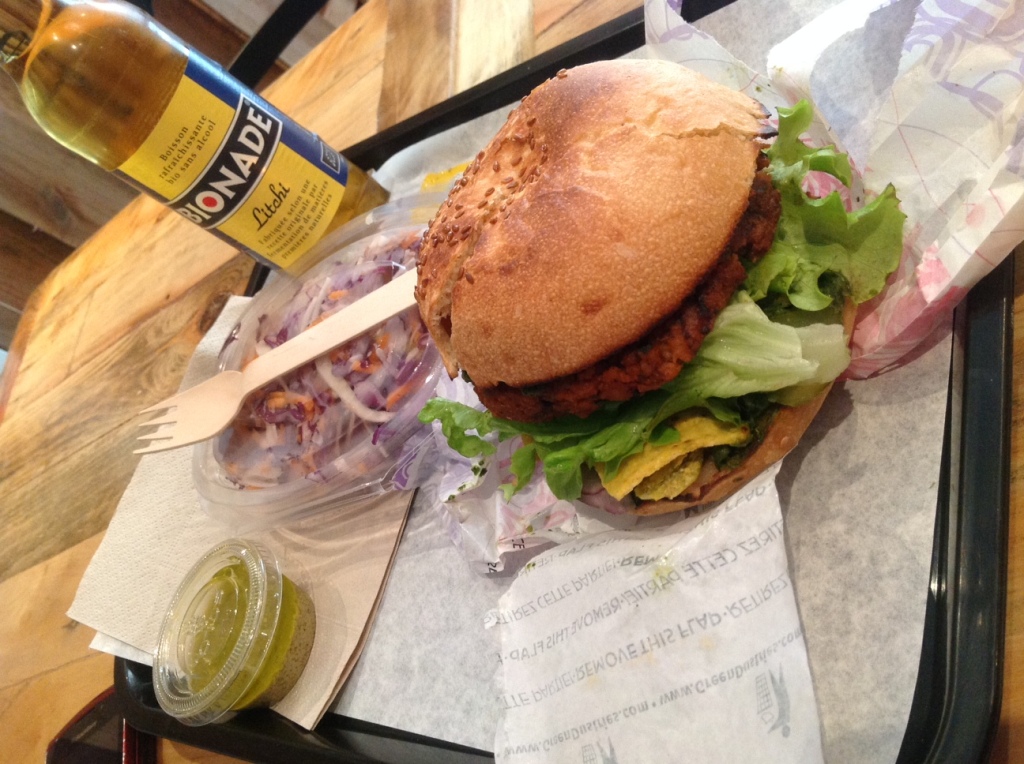 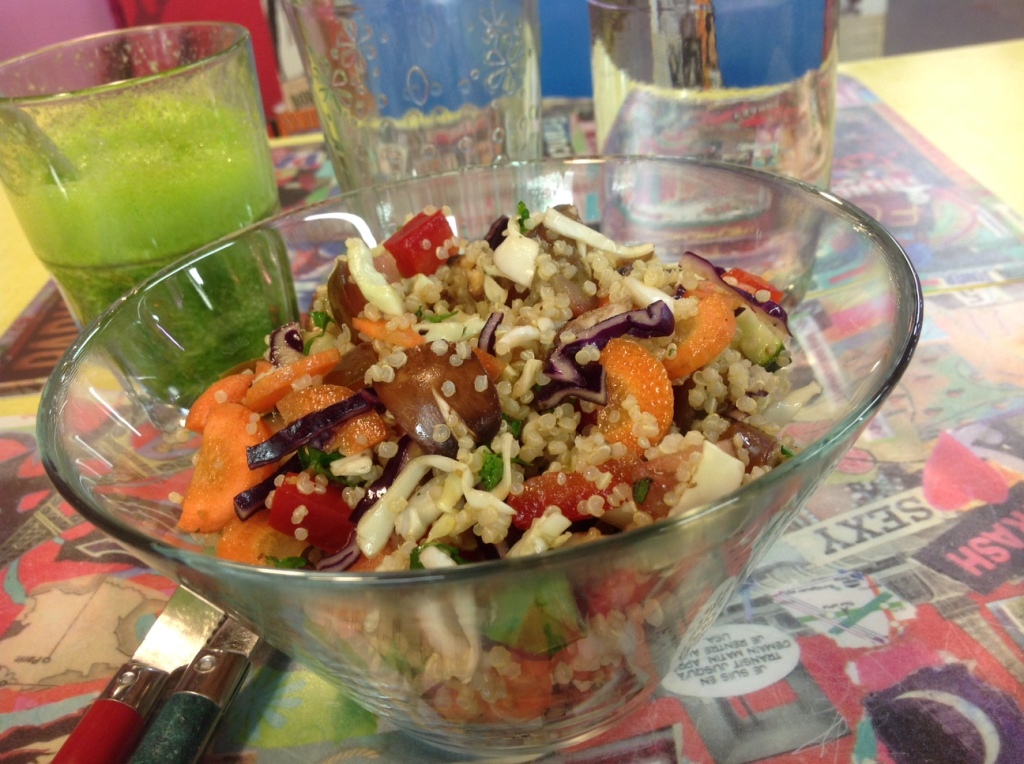 And the last place that I visited was My Kitch’n. I debated for a time about going to this one or not. It’s a small cafe in a marketplace, and it’s right across from a butcher (actually a couple of them). I wasn’t sure if I really wanted that experience, but I decided that I wanted to support the place and be an example to the public that people do eat vegan. I’m glad that I did.  There I had the only green smoothie of my time in Paris, and a great Thai Quinoa Salad.

Dessert was a nice raw carrot cake with a sweet frosting, and some jasmine tea. The owner was very sweet and it’s obvious the time and care she puts into her food. It was definitely a good choice. 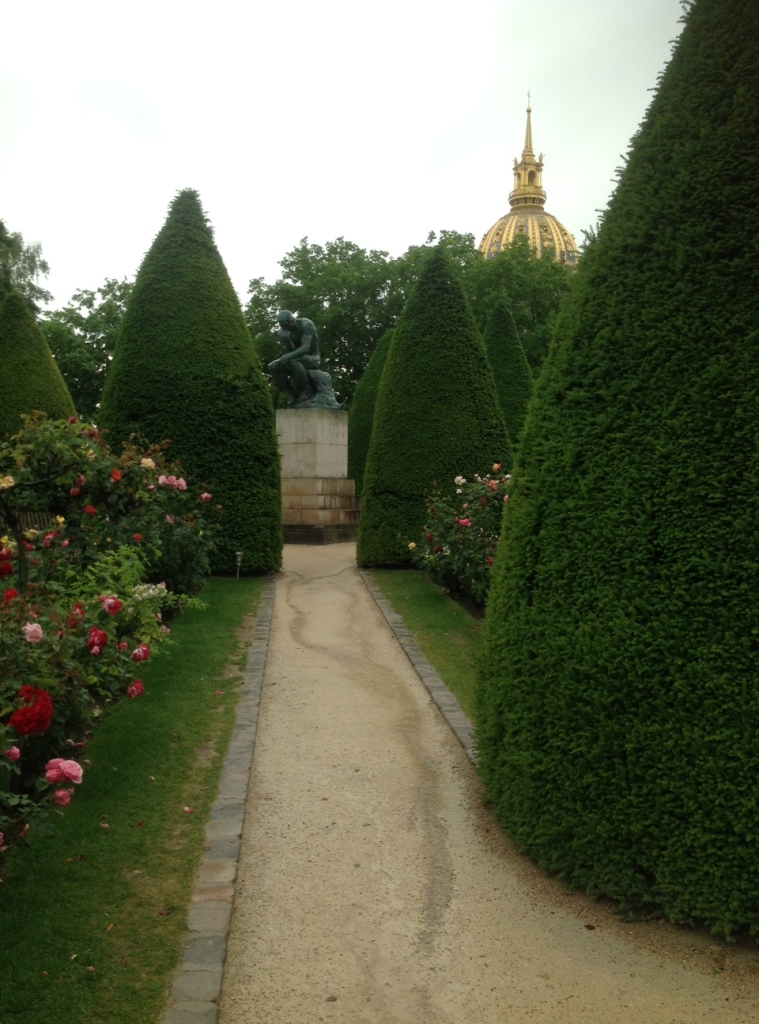 There are other places that I wanted to visit but didn’t have time to get to, so those will have to be on the next trip. I did do a little sightseeing (aside from the insides of the restaurants!), including the Rodin Museum, which I loved, and some of the shopping districts.  The Rodin Museum has really beautiful outdoor gardens, and the rain even stopped long enough for me to stroll through them!

4 thoughts on “Vegan in Paris”