Finally home again, and back to regular posting! It was a very quick 5 days in New York – lots to do and LOTS to eat 🙂 .

Here is the amazing food from the second part of the trip – just as yummy as the first part. I didn’t get to all of the restaurants that I wanted to, so am planning to return again soon…..

On Tuesday, I ventured down toward Union Square, and went to a couple of places that are clustered in that area.

For lunch, I went to Pure Food and Wine. I’ve heard about it for a very long time, along with its takeout counterpart, One Lucky Duck. Both of these places are the vision of raw food chef Sarma Melngailis, and they are raw food heaven. 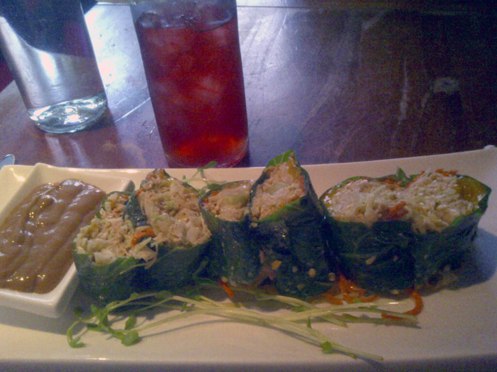 For lunch, I had the Thai Lettuce Wraps and they were really great, although quite messy. What was interesting about them is that they were made a little differently than others that I’ve had in the past. Usually, I find that lettuce wraps tend to be crunchy and have a nice sesame-almond butter dipping sauce. These wraps seemed to be marinated right in the nice sesame-almond butter dipping sauce!  The lettuce was wrapped around things like cabbage, carrots, jicama, etc, and it was all quite… I hesitate to say “soggy” because that usually has negative connotations, but it was totally marinated in the sesame-almond sauce, and was all very soft. It tasted wonderful. With them came a tamarind dipping sauce. 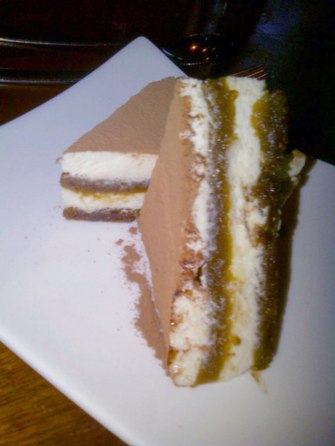 And for dessert, I got the raw vegan tiramisu… absolutely incredible. That is one thing that I have not yet tried to make raw, but this was so good that I must….. 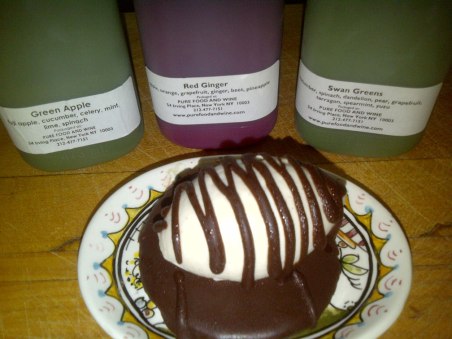 After lunch, I walked around the corner to One Lucky Duck, the takeaway sister to PF&W. I’d heard about their raw vegan mallomar cookies, and had to try them while I was there.  If you’ve never had a regular mallomar, they are a crunchy cookie topped with marshmallow and all covered in chocolate. This raw version was the most amazing thing I’ve ever eaten! I tried to bring one home with me, but it melted on the plane :-(.  I will be trying to recreate it in the VERY near future!  I also got some juices to have later in the day. They were all amazingly good.

On Wednesday, my last night in New York, I went to Candle 79, another very popular, very classy, vegan restaurant. It was a perfect way to end the trip.

For that dinner, I wanted 2 things – I wanted something raw, as I’d definitely been eating less raw food on the trip, and I also wanted some bread, so I got both:

I had the smoked hummus appetizer, which came with grilled paratha bread, olives, an entire head of roasted garlic, and red pepper oil … 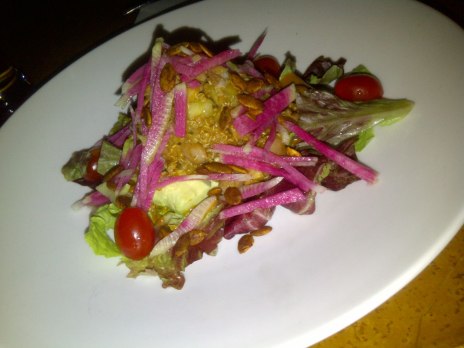 and I had the stuffed avocado salad. This photo doesn’t do it justice, because you can’t really see what’s going on, but it was a bed of greens, topped with half of an avocado, which in turn was topped with quinoa pilaf, grape tomatoes and julienned radishes. The quinoa pilaf had jicama, cucumber, cranberry beans, and toasted pumpkin seeds. And the whole thing had an incredible chipotle-avocado dressing. Yum!

And you know what they did? While people were waiting for their meals to arrive, the servers came around with taster spoons of something new…  this was some kind of white beans with poblano chile sauce. Really good….

By the time I finished eating all of that, I was very full, but there was no way I was passing up one last dessert. Several of them looked really good, but I chose the cannoli, because I don’t find that in too many places. The cannoli was stuffed with vanilla cream (that had a cream cheese taste to it), and dipped in mini chocolate chips on the ends. It had coconut ice-cream and a great puddle of chocolate sauce with it. Very incredible….

And finally, I tried their spiced espresso. I’m not an espresso drinker… soy lattes all the way… but it sounded so good that I had to try it :-).  It was a small cup of espresso (actually probably about 2 shots) with ginger agave, cinnamon, chili pepper, mole bitters and an orange twist. VERY interesting! I probably wouldn’t get it again, because I really am not a big espresso fan, but it’s given me some great ideas for upcoming lattes and hot chocolates! The flavors in it were fantastic.

All in all, it was a fantastic trip, and I’m definitely planning to go back again in the near future.  And next… I’ll be very happy to start posting my own recipes now that I’m back at home for the foreseeable future.

And don’t forget about the Virtual Vegan Potluck coming up on Nov. 1 !