As soon as I saw that the theme for today was “most retro recipe”, I knew I had to make vegan ambrosia. Even though it was originally known as a Southern traditional dessert, most people I know who were kids in the 60s and 70s had this in some form at nearly every picnic (and I grew up in New England). 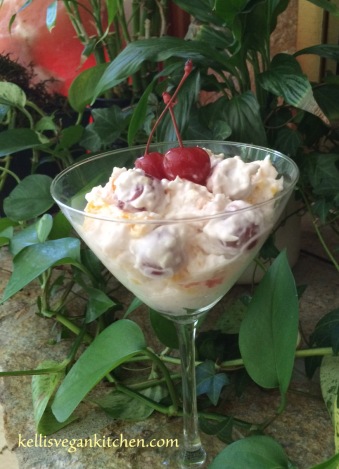 How I loved this dish and got so excited every time I saw it on the table at a gathering. Little bits of sweet fruit enveloped in whipped topping (usually Cool Whip), sour cream, marshmallows and coconut ~ what’s not to love?

I followed the example of my 70s foremothers and used prepared ingredients for it. When I was researching the recipe, I saw that apparently some people make everything from scratch (Alton Brown has “homemade marshmallows” in his ingredient list). I did not do that… 🙂

I did make it a bit healthier than traditional recipes (aside from leaving out the animal products). I used fresh fruit rather than canned, and I used these cherries so as not to be eating all that red food coloring:

Mix together all of the ingredients and chill for at least 2 hours before serving. Makes 2 1/2-3 cups.