Oh, the best sandwich ever. This is a tough one for me because I LOVE sandwiches. They are one of my very favorite things in the world to eat, but I rarely take the time to make really great ones for myself, mostly because it takes a while to put a really amazing sandwich together, and then it takes about a minute to eat. So when I go out, they are always one of my items of choice to order.

So for this, I narrowed it down to 2 sandwiches, neither one of which I made myself (though I have recreated #1 a couple of times).

The first one I got once from Whole Foods, and they called it the Pulled  Porkless Sandwich. The photo doesn’t do it justice, though. It doesn’t look like much but it was fantastic!

It was a toasted ciabatta roll, with Gardein chicken that was covered with BBQ sauce and vegan cheese and toasted. Then that was topped with vegan cole slaw and pickles. Trust me, it was one of the best things I’ve ever eaten.

I said that I got it once at WF, and sadly that is the truth. While my local WF had it on their menu for several months, every time I ordered it after that, they told me that they “didn’t have the ingredients to make it”. Hmmm…. we’re in a grocery store filled with every food item imaginable and they didn’t have the ingredients? Doesn’t sound quite right to me, and so then after a while they finally took it off the menu. Now I definitely have to make it for myself!

And my #2 favorite of the moment I had a couple months ago at Real Food Daily in Santa Monica, and it was their Banh Mi sandwich. 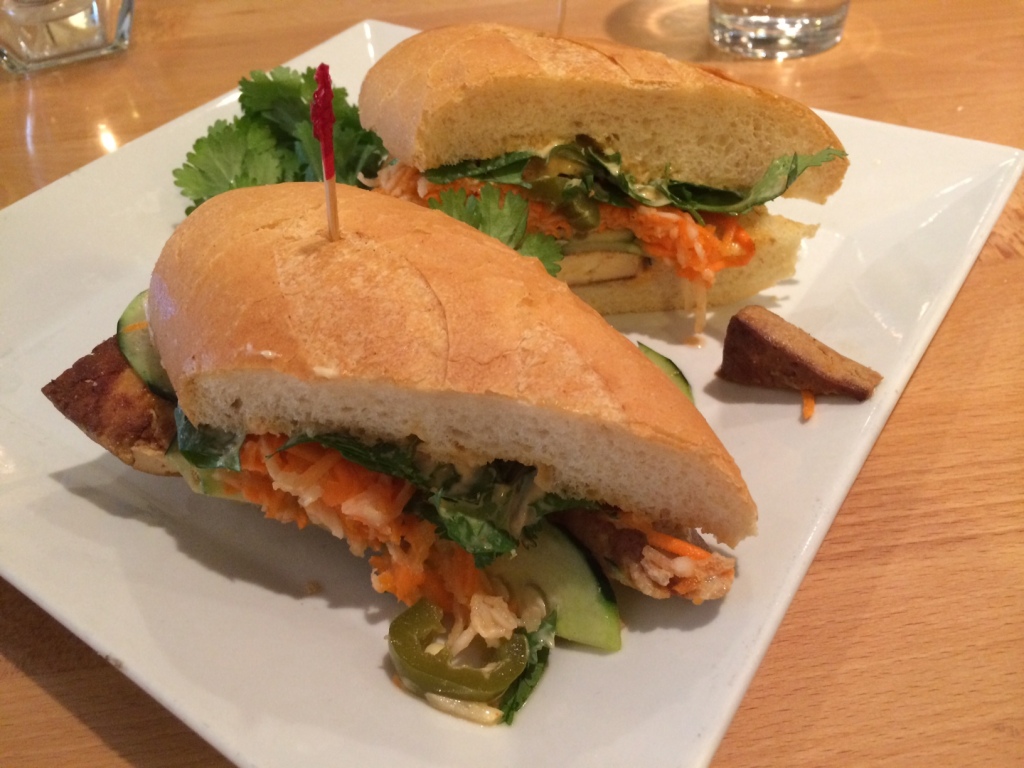 Incredibly photogenic, and so so good!  This amazing sandwich consisted of lemongrass tofu, pickled carrot, daikon and jalapeño, cucumber, spicy aioli, on a french baguette, with cilantro, thai basil, and lime. Truly, it was one of the best I’ve ever eaten. I was starving the day I was there, so I had mashed potatoes and gravy on the side and it was just like Thanksgiving in Vietnam 🙂

And now it’s nearly midnight and I need to go make myself a sandwich…..

2 thoughts on “The Best Sandwich Ever ~ Vegan MOFO Day #5”