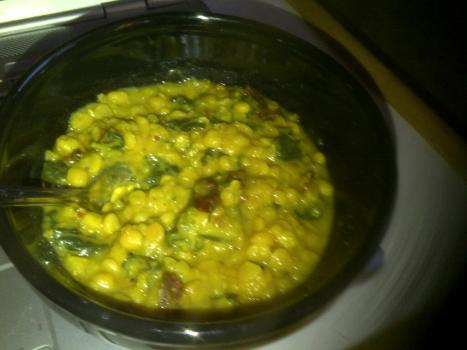 Today I decided to experiment with a variation on a plain dal recipe and add some kale and sun-dried tomatoes for some color and nutrients. 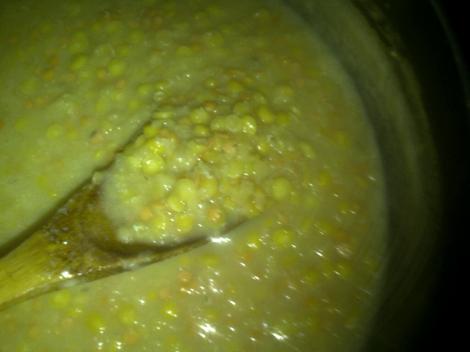 I started by cooking 2 cups of dal in 4 cups of water. I used about half red lentils and, when I ran out of that,  half channa dal. I cooked it for about 30 minutes. At that time, the red lentils had turned into mush, and the channa dal was soft but still pretty al dente. I let it sit, figuring that it would cook more when the rest of the ingredients were added.

I took 5 leaves of dinosaur kale – the flat kind – and washed and chopped them. I left them in fairly large pieces to wilt into the dal.

Next came the spices – (clockwise from bottom) 2 cloves of minced garlic, 1 teaspoon of mustard seeds, 1/4 teaspoon of red pepper flakes, and 1 teaspoon of cumin. I’d have used cumin seeds instead of ground but had none today…

I heated a couple teaspoons of grapeseed oil in a pan – not much, just enough to start off the spices. I added the garlic and mustard seeds first, and after they had cooked for a few minutes, put in the pepper flakes and cumin.

I added the kale, which was still wet from being washed. The water gave the rest of the liquid needed to wilt the kale and pick up the spices from the bottom of the pan.

I added 1/2 teaspoon cayenne pepper and 1 teaspoon of turmeric to the kale/spice mixture. 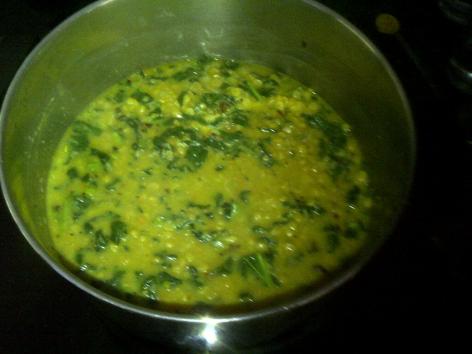 I added the cooked dal into the kale mixture…

and chopped 5 sun-dried tomatoes to add to the pot.  About a cup more water went in, and it all cooked together for about 10 more minutes.

When it was finished, the channa dal was still a bit al dente, but it added a nice texture to the dal. The typical mushy or soupy dal is great, and this was a nice alternative that was also great. It was nicely textured and wonderfully spiced, and a fantastic high-protein, high-fiber meal.

1 thought on “Dal with Kale and Sun-Dried Tomatoes”